A COMPREHENSIVE AND AUTHENTIC GUIDE ABOUT CRYPTOCURRENCY

Let us explore the concept of cryptocurrency and understand how it offers value to us.

Cryptocurrencies are like digital Cash. They allow fast, direct and seamless transactions between the parties. The best part is that you have complete control over your balance and payments. As a digital currency owner, you can spend the cryptocurrency with transparency and ease.

Since you have complete control over your cryptocurrency, you do not require a central authority for validating your transactions. The validations are managed by the digital currency network.

The transactions are managed in a distributed way in case of cryptocurrency. The cryptocurrency is stored in digital wallets. The best part is that your wallet is completely secure. This security element is managed through a private key.

If you have a wallet app on your phone, then you can make your payments through digital cash.

If we look at cryptocurrency with a bird’s eye view, then one thing is quite evident. The cryptocurrency was developed as an application on top of cryptographic invention popularly known as the blockchain.

Interpreting the concept of the blockchain

The computers basically aim to solve this problem. The important thing to mention here is that if you change the information in the block, then it becomes broken and invalid. The only way you can fix the block is by replacing the incorrect data with the correct information.

If the data in one block gets altered, then it affects the entire blockchain, and the whole blockchain also becomes broken.

When a new block is created in the blockchain, then it takes up the data from the previous block. This eventually creates a link and the blockchain. Now, a question might come to your mind in this situation. You might ponder over the fact when a block becomes valid.

A block usually becomes valid when other blocks get added to the chain, and this enhances the element of security also. It will not be wrong to state that the blockchain is more of a transaction ledger for the cryptocurrency.

Now, the miners need incentives to work, and this is one of the reasons that they are given a prize for their work. The prize is usually in the form of coins. Sometimes the miners also get concessions in the transaction fee. The miners have one more responsibility as well. They have to ensure that the transactions are valid. What the miners do is that they examine the existing blockchain to make sure that the sender has sufficient balance.

The blockchain is visible to everyone, and this is why the transaction that is made from a specific wallet is visible to all. When a miner can solve a new block, then he announces it to the network to get the needed acceptance.

Once a miner announces the new block, the other miners verify the transactions. This is a measure to ensure that a rogue miner does not enter invalid transactions into the blockchain.

When new blocks get added to the blockchain, then the old blocks are considered confirmed. If a blockchain has a huge number of confirmations, then it is considered as a trusted blockchain. When the network verifies the transaction ledger, then it called the distributed ledger. The benefit of the distributed ledger is that it cannot be hacked or counterfeited. To understand the working of cryptocurrency look at the image below. 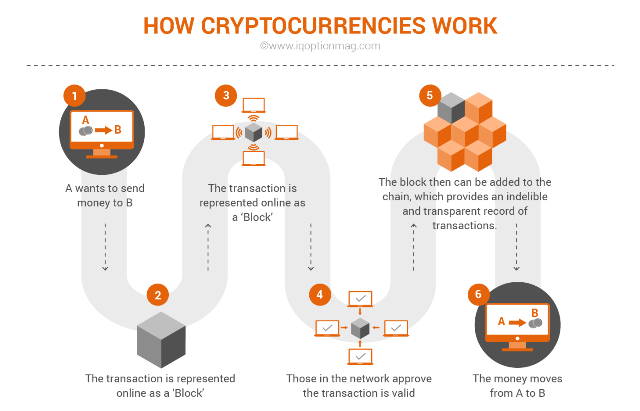 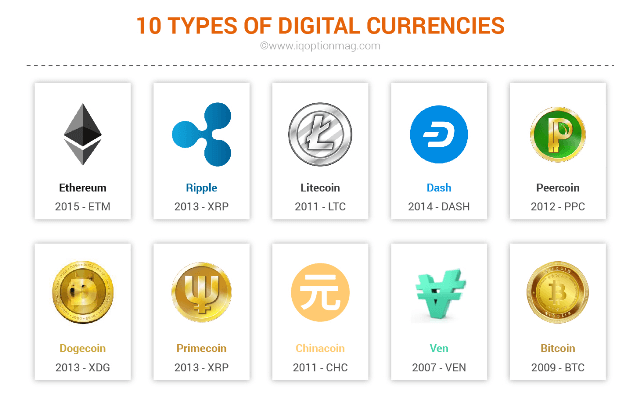 The Bitcoin is one of the top-notch cryptocurrencies and claims to be the market leader. The reason is that the Bitcoin has an established reputation. What is worth appreciating about this digital currency is that it has a huge community.

The interesting part is that Bitcoin is quite popular among the retailers as well. Amazon allows the consumers to purchase gift cards using the cryptocurrency. Overstock.com accepts payments in the form of Bitcoin.

At the moment Bitcoin can claim to be one of the most valued cryptocurrencies. It has a market worth of about $96 billion.

Well, Litecoin was released way back in 2012. It can be termed as a version of the Bitcoin and utilizes most of the original Bitcoin code. The benefit of this cryptocurrency is that it allows faster payments and has a better transaction throughput in comparison to the Bitcoin.

The XRP (Ripple) is also a reputed cryptocurrency, and it allows the financial institutions to make the global payments with ease. Ripple can handle about 200 times more transactions per second in comparison to the Bitcoin.

When we are talking about popular cryptocurrencies, we cannot miss out on Ethereum. It helps the companies in deploying the applications on the distributed blockchain.

If you are all set to invest in cryptocurrency, then you should also think along the lines to invest in Monero. It is an open-source cryptocurrency that was created way back in April 2014. It focuses on decentralization and fungibility. Monero offers scalability and security that is not offered by other cryptocurrencies.

Well, Tron is also one of the popular cryptocurrencies and it was founded in 2017. Tron is an ideal cryptocurrency for those investors who have limited funds because it allows cheap transactions. It will also be able to support smart contracts that are written in languages like Java.

This cryptocurrency is also appealing for most of the investors. The reason you can invest in Iota is that the company behind Iota has the necessary funds to empower the development of this digital currency. Plus, this cryptocurrency enjoys a strong community as well.

If you are planning to make cryptocurrency investments, then make sure that you explore their concept in detail. Understanding is essential to get necessary success in the field of digital currency investment. Try to invest in the cryptocurrencies suggested above and you will surely be able to make profits. Take your first step right away.

Risk Warning: Trading may not be suitable for everyone, so please ensure that you fully understand the risks involved. Especially trading leveraged products such as Options, Cryptocurrencies, Forex and CFDs carry a high degree of risk to your capital and can result in the loss of your entire capital. Between 74-89% of retail investor accounts lose money when trading CFDs. Only invest with money you can afford to lose.
Desktop Version
Ok